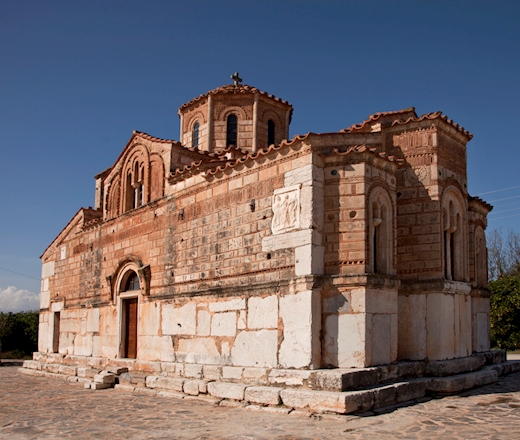 At the south edge of the village is the Franko-Byzantine church of the Koimisi of the Theotokos, one of the greatest medieval monuments in Greek territory. The question of its founding and chronology has been at the centre of archaeological research for decades. 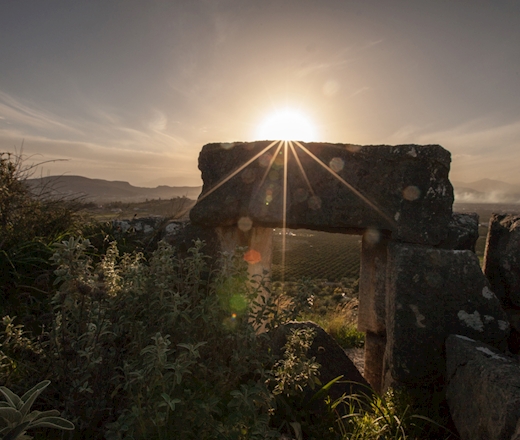 At the summit of the rocky hill, known as 'Paliokastro' or 'Hadrian's Castle', east of the village of Agios Adrianos, is a small fort that was built at the end of the 4th century BC. The construction belongs to a network of forts from the Hellenistic period, which controlled the land route that connected the city of Argos with Epidaurus. 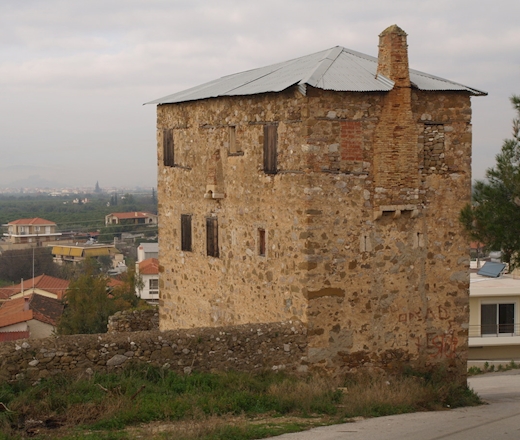 Nearly rectangular in plan. It consisted of three levels (ground, and first and second storeys), and had a four-sided tiled roof. 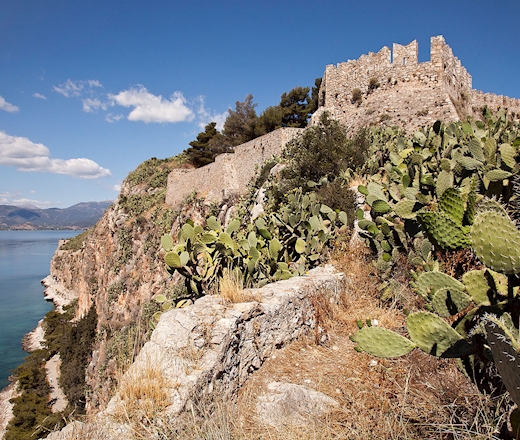 The rocky tip of the peninsula of Nafplio, which is known today as Akronauplia, is 800m at its longest, has a height of 85m, and is around 250m wide. It is on this peninsula that the castle named after it was built. The remains of human habitation from all historical periods have been found there. As part of the implementation of the NERF 2011-2015 project, 'The Display of the Castle of Akronauplia in Nafplio, Nafplio Municipality, Regional Unit of Argolis', the 25th Ephorate of Byzantine Antiquities, now the Ephorate of Antiquities of Argolis, carried out work for the uncovering, cleaning, documenting, protecting and displaying of the monument. 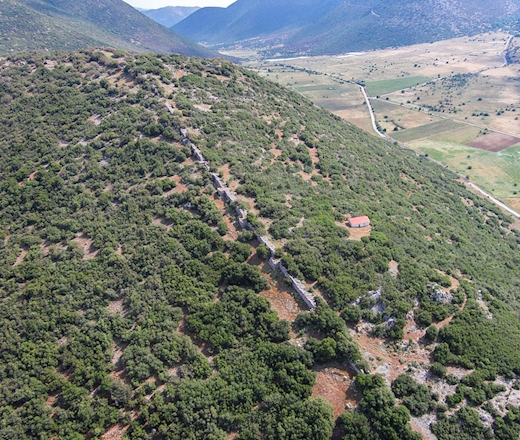 The acropolis of ancient Alea (Bougiati)

The area of Alea (Bougiati) is 74 km west of Argos. In ancient times, Alea was an Arcadian city founded by Aleos, the son of Apheidas. The well-fortified acropolis, built of limestone blocks, took up the plateau on Tapia or Goula Hill. 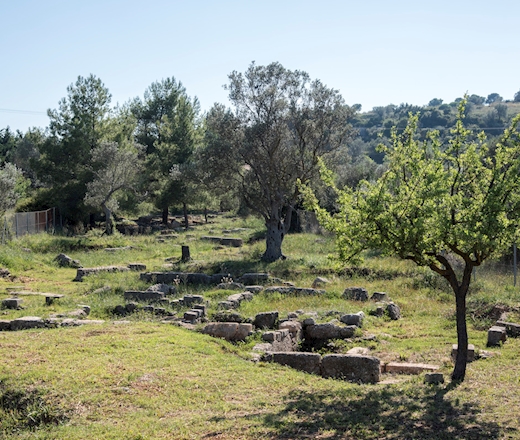 Southwest of Ermioni, close to modern Porto Heli, the ancient city of Alieis was founded at the end of the 7th century BC. It flourished between the 6th and 4th centuries BC. Following the destruction of Tiryns by the Argives in around 460 BC, many Tirynthian exiles settled here, which is demonstrated by the coins of the city of Alieis which bear the inscription 'Tirynthion' [of Tiryns] and date from the end of the 5th century to the beginning of the 3rd century BC. 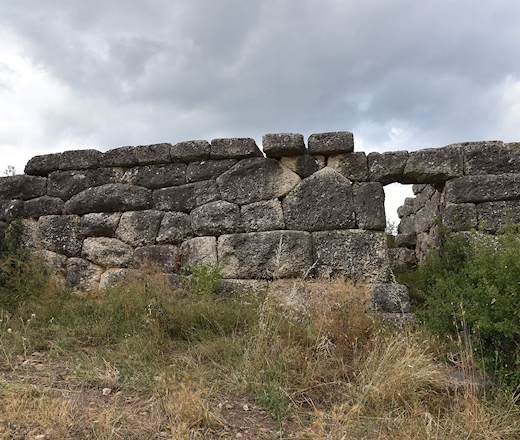 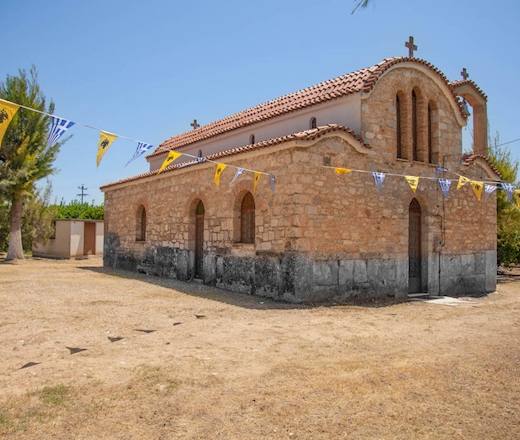 Sacred Church of the Sotir (Agia Sotiria) in Anyfi

This church, which is known as 'Agia Sotiria', is located in the fertile area of the Argolic plane, on the road from Chonika (now Neo Heraio) towards Anyfi. 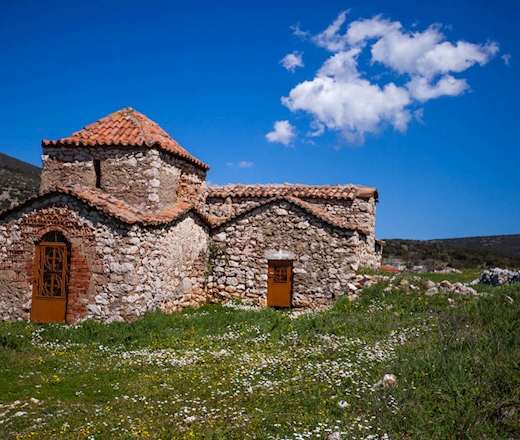 The Old Monastery of Talantio in Arachnaio

The Old Monastery of Talantio is located to the south east of Arachnaio and is one of the most important monuments in the area. The catholicon would have been dedicated to the archangels, the Virgin Mary and Agios Vlasios, while the chapel was dedicated to Agia Marina. 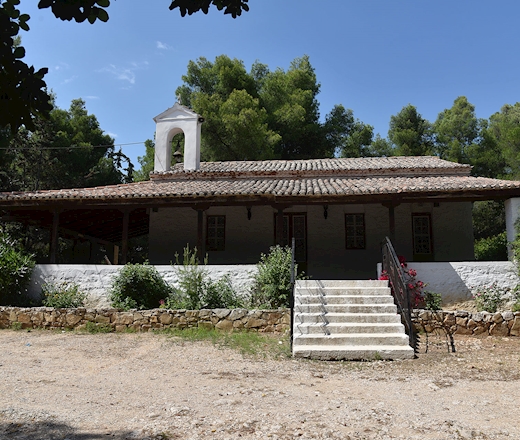 The church of Profitis Elias is built on the top of the low lying Aspida Hill (Deirada). It is a small single-room church with a wooden roof, which has a small semi-circular apse on its eastern side. 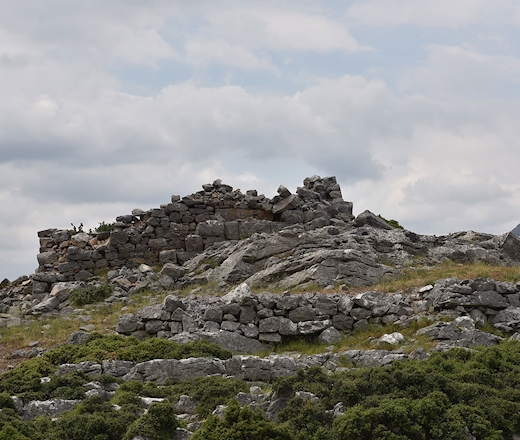 This limestone construction stands at an altitude of 920m, and overlooks the Inahos Valley and the road to Alea. It was built at an important lookout point and controlled the access and communication network (ancient roads) which were connected with the socio-political situation in northwest Argolis during the 5th and mostly the 4th centuries BC. 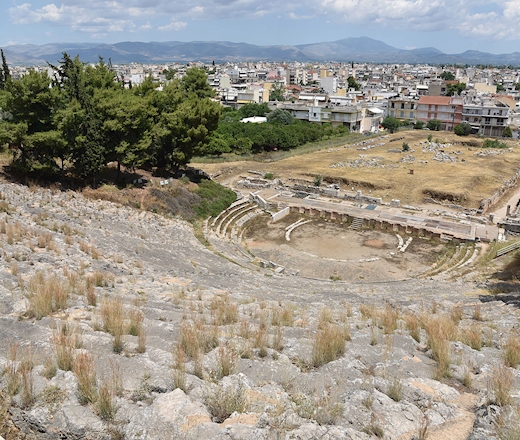 In the south-eastern foothill of Larissa it was founded during the Hellenistic period (300-250 BC) the Theatre. Theatre that could host up to 20.000 spectators constitutes one from the biggest ancient theatres in Greece. In its long-lasting use it entertained the musical and dramatic Nemean games, as well as games in honour of Hera. During the Roman era should be also established games in honour of the emperor.

The Archaeological Museum of Argos

From the 1960s, the Archaeological Museum of Argos has been housed in a building complex which consists of the historic residence of General Dimitrios Kallergis and a modern building that was attached to it, at the intersection of Vasilissis Olgas and Kallergis streets. The Kallergis residence, built in 1830, was converted between 1956-1957 to make it suitable for a museum, while the additional modern building, which was built with funds from the French Archaeological School, was dedicated in 1961.

The building has been closed to the public since 2014, as there is work going on to upgrade the building and re-display the collection, with joint funding from Greece and the European Union.

The Heraion, a sanctuary of the goddess Hera, the patron goddess of the city-state of Argos, was its official religious centre, even though it was 8 kilometers distant. 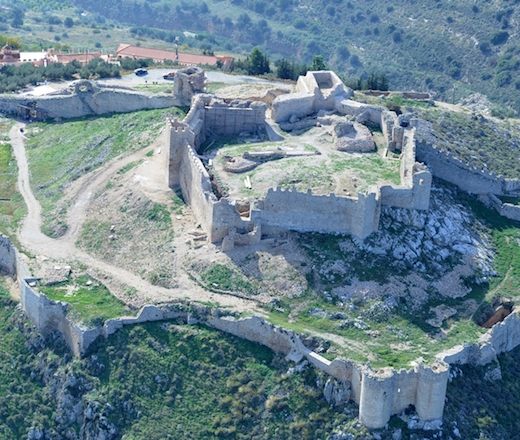 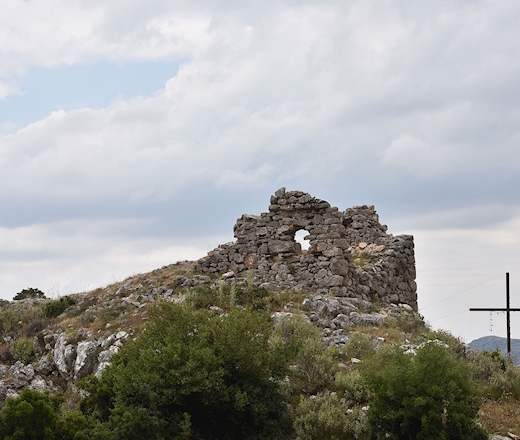 On a small limestone outcrop opposite the church of Panagia Karya in Kastro, the rectangular facade of an ancient wall is visible, inside which a fort from the Byzantine was based. It was part of the defensive network (beacons) which controlled the outlying areas of NW Argolis in the 5th and mostly 4th centuries BC.