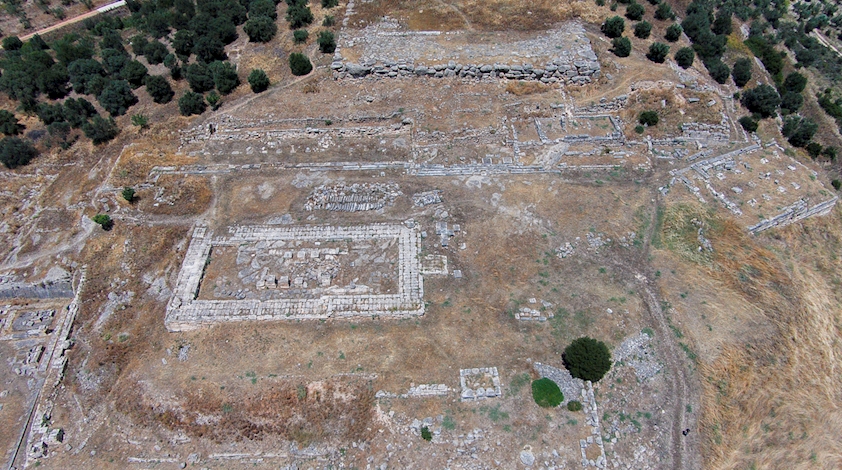 The Heraion, a sanctuary of the goddess Hera, the patron goddess of the city-state of Argos, was its official religious centre, even though it was 8 kilometers distant. The famous sanctuary of the goddess was built on th esouthern foothills of the Euboian mountain range (modern Aetovouno), directly below its highest peak, Akraia. On the west this small eminence is bounded by a torrent bed, known as ‘Eleutherian Water’ (modern Kastro stream), which was used by the priestesses of the goddess to purify themselves. To the east of the eminence is the river Glykeia, the ancient Asteria, who according to tradition was one of the river-judges that granted Hera the protection of Argos in her rivarly with Poseidon and because of the god’s wrath turned into torrent beds.

The place was first discovered by General Gordon in 1831 an later excavated by Bursian and Rangavis (1854), Schliemann and Stamatakis, who excavated the tholos tomb (1878). The systematic excavations conducted by the American School of Classical Studies (Waldstein: 1892-95; Blegen: 1925-28) and later in collaboration with the French and American Archaeological Schools (Casket-Amandry: 1947-1949), showed that the site of the Heraion was on the of Mycenaean Prosymna, whose Acropolis was on the site where the sanctuary was later built.

The use of the place began in the 3rd millennium BC, but the first important finds, the tholos tomb at the site of Asprochoma and the cemetery of the chamber tombs west of the Kastro stream, date to Mycenaean times (15th – 13th century BC). The district of the Heraion was connected to Mycenae by an important road, whose course is indicated by the bridges that have survived.

In historical times, from as early as the 8th century BC, the sanctuary of Hera grew up in the place venerated during the Mycenaean period, which the Argives in their desire to control the area, promoted as the centre of an amphictiony of the cities of the Argolid plain. From then on the city of Argos was linked to the sanctuary by a road 8 kilometers long. From the 7th century BC Hera became the revered patron goddess of the city and it was then that the first temple was erected. The importance of the sanctuary not only for the city but for the Panhellenion increased continuously, and the calculation of the local chronology is based on the chronological list of the priesthood serving the Heraion. The cult of the goddess in the Heraion must have been a mystery one, and its character related to the Mycenaean goddess of nature who blessed the abundance. The heyday of the sanctuary was in the 5th century BC, but the place continued to function until Late Roman times, as the traveller Pausanias confirms (2nd century AD).

The place on which the sanctuary of Hera was built was organized on two successive terraces on different levels. The uphill climb to them is from the south via a monumental stairway, which together with the strong terrace wall on its east acted as a huge retaining wall for the first earthwork. On the west, a Doric stoa with a double colonnade was constructed (as a waiting place) halfway up the great stairway. From this place and from the monumental stairway the votaries followed the procession that arrived from Argos on the day of the celebration of the “Hekatombaia”. The terrace, stoa and stairway go back to the 5th century BC.

The new temple of the goddess, a Doric peristyle building of limestone, with 6 x 12 columns, and possessing a pronaos, cella and opisthodomos was constructed in 420 BC to plans by the Argive architect Eupolemos in the centre of the first terrace. In the cella stood the gold and ivory statue of Hera, by the Argive sculptor Polykleitos. Next to it was the gold and ivory statue of her daughet, Hebe, by the Argive sculptor Naukides, and a xoanon (wooden statue) of the goddess, that the Argives had taken from Tiryns in 468 BC, when they destroyed it. East of the temple in Hellenistic times was built on oblong altar, and still further east in the middle of the 5th century BC a hypostyle hall divided into four aisles, reminiscent of the Telesterion at Eleusis. West of the first terrace, founded on a lower level of the place, outside the retaining wall of the place, is an earlier building. Quadrilateral in shape, with a central courtyard and three rooms with couches and tables, it was evidently a room for symposia. North of it was another stoa, 5th century BC in date, with a large flat terrace in front. Along the north side of the first terrace is a complex which together with the symposium building belonged to the earlier temple.

The acme of the Heraion lasted until Roman times. There are two buildings of this period on the west of the sanctuary. The one to the south, with the shape of a Γ, was a Gymnasium, and the one to the north Thermal Baths. The place was preserved by the Argives as a venerated ruin until Pausanias’ day.