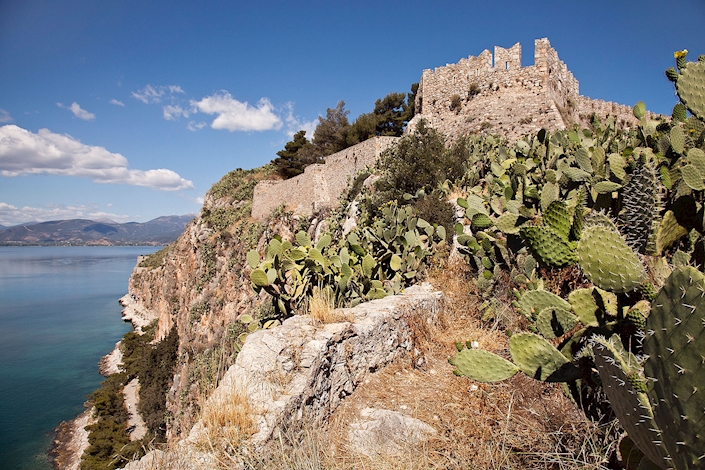 There is evidence of the presence of the first organised settlement at Akronauplia at least as far back at the end of the 4th century BC, which is the date of the first phase of its fortification using polygonal hewn stones, which have survived to the present day and comprise the base of the later walls.

The walls surround the rock where the acropolis is not protected by the naturally steep rocks of the peninsula. In the 7th century BC, Nafplio was conquered by neighbouring Argos and became its naval base and port. When Argos fell into decline, as the result of the Peloponnese being occupied by the Romans, Nafplio fell into obscurity to such an extent that Pausanias, during his the 2nd century BC tour of Argolis, found it abandoned, but mentions the existence of a temple to Poseidon on the peak of the peninsula.

The Paleo-Christian and Byzantine period (4th to early 13th Century)

The occupation of the Castle of Acronauplia during the Byzantine period is demonstrated by Paleo-Christian architectural elements and coins. The eastern fortifications and the two chapels inside the castle, Agios and Andreas and the Agoi Theodoroi, date from the Mid-Byzantine period.

The castle-state, during this period, was under the rule of the De la Roches, the De Briennes and the D'Enghiens. Following the seizure of the castle by the crusading knight, Villehardouin, Akronauplia was divided into two sections by a partition wall. The Frankish occupation came to an end in 1389, when—faced by the danger of the Turkish threat and under pressure from Nerio Acciaiuoli, the Florentine lord of Corinth—Maria d'Enghien, surrendered Nafplio to the Venetians.

Following the fall of Argos (1463) and Chalkis (1470) to the Ottomans, the Venetians sent Vittore Pasqualigo to be governor (podestà), accompanied by Antonio Gambello, the architect. They carried out a series of fortification and infrastructure projects, which changed the appearance of Akronauplia. The fortifications were now adapted to fit cannon. The first to be fortified was the eastern section of Akronauplia, with the creation of the Castello di Toro. The eastern wall was modified, with addition of flying buttresses, the closing of the gate and the construction of a new entrance at the southern edge. Later, the Traversa Gambello, a fortified complex of bastions and gates, was built in the middle of the Frankish castle.

The city extended towards the north, at the expense of the sea, as, with the creation of artificial banks and the use of wooden posts as foundations, the lower city was created. This was reinforced from the seaward side with walls and, on the landward side, the Porta di Terraferma [the land gate] was built. The administrative centre was moved to the lower city. The entrance to the harbour was also made more secure, with the fortification of the small island, the Bourtzi.

Nafplio was the base of the Ottoman administration of the Peloponnese. A monument of the time is the mosque, to the east of Syntagma Square, which today houses the 'Trianon' Theatre. The Turkish traveller, Evliya Çelebi, who visited the city in 1668, wrote that there were many houses within the Castle of Akronauplia, and a large mosque on the top of the hill, the Fethiye, which was originally a Christian church dedicated to Agios Andreas. In the lower town there was a concentration of multi-storey houses, with enclosed balconies, trellises, windows, etc. It may have been in this period that the first isolated attempts at repairing the fortifications began.

This period, although really quite short, was of lasting importance for the city. Nafplio, known as Napoli di Romania, became the capital of the Kingdom of Morea (Regno di Morea) and the Venetians hastily proceeded with the fortification of the rock of the Palamidi, building the defensive complex that we can see today, which was a great achievement in the history of fortification. The fortification of the Palamidi resulted in the downgrading of the Castle of Akronauplia, which, in 1686, by order of the Venetians, was designated for use exclusively by the military. The eastern section of the Castle of Akronauplia, along with the Land Gate in the lower city, were reinforced with the creation of a new bastion, which was given the name of the governor general of the Peloponnese, Grimani (1706). The same governor general gave his name to a building for housing the troops, built in 1706, in the location of what is now the 'Nafplia Palace' complex (the Grimani barracks). In the same year, the arsenal was built, west of the dividing wall. In 1713, the governor general, Agostino Sagredo, had the Sagredo Gate constructed in the north wall of the Roman castle. In 1713, the Naval Warehouse was constructed in Syntagma Square; these days it serves as the Archaeological Museum.

The fall of the Palamidi to Kolokotronis' army in 1822, freed the city from the Ottomans. It was declared the first capital of the newly formed Greek Sate in 1827. In 1828, Ioannis Kapodistrias disembarked in Nafplio, as the first governor of Greece. The Grimani Barracks in the Castle of Akronauplia, which were in a state of ruin, were rebuilt and became known as the Kapodistrias Barracks, and later became a prison. At the same time, the fortifications of Akronauplia were cleared of the piles of rubble. The scattered hovels were renovated to house the guard and, at the same time, the first military hospital was built next to the east wall, as was the chapel to the Agoi Anargyroi. During the post war years, 1950-1975, the Castle of Acronauplia became a centre of intensive touristic development, with the creation of two hotel complexes, the Xenia, to the west of the peninsula (1961) and the Xenia Pallas, to the north east (1971).