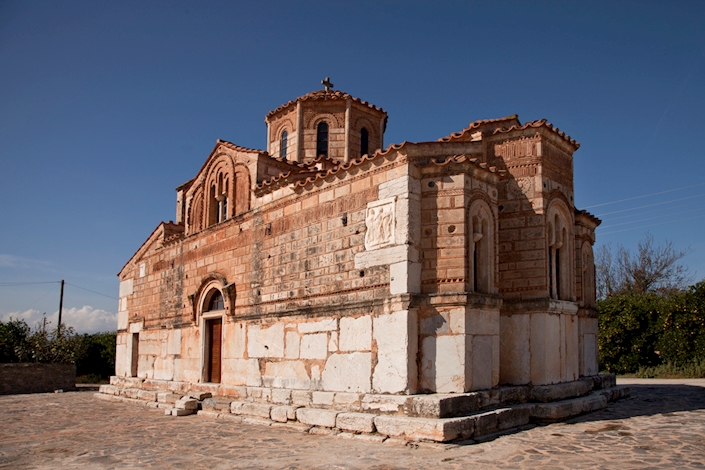 At the south edge of the village is the Franko-Byzantine church of the Koimisi of the Theotokos, one of the greatest medieval monuments in Greek territory. The church is of the complex four columned cross-in-square type, and is built above a three-level crypt, with bulky ancient stone used for its lower section and the cloisonné system used for the upper. The question of its founding and chronology has been at the centre of archaeological research for decades. The most commonly held idea is that it dates from 1280, due to the gothic elements (the extensive use of carved limestone, double pillared arched window, pillared dome, etc.), as well as the inlaid ceramics which differentiate its interior surfaces, standing out among which are the proto-maiolica cups from south Italy. Included amongst the western elements is the church's single-chamber crypt which is under the altar. The walls of the church are differentiated with ancient materials, notable amongst which are embossed columns, inscriptions and a sun-dial.

Not a trace has survived from the original mural decoration, however, there are murals, mostly in the area of the altar, which likely date from the end of the 14th-beginning of the 15th century, to the time of the first Venetian occupation, among which stands out the rare depiction of Agios Petros, bishop of Argos, on the prothesis [altar].

The founder of the church was most likely the Latin archbishop of Corinth, Wilhelm de Moerbeke (1277-1286). A leading figure of the time, a scholar and philhellene, he translated ancient Greek writers. In fact, it is speculated that he himself chose the ancient material, in order to symbolise the union of the two Churches, after the Synod of Lyon (1274), in which Moerbeke participated. Quite possibly, it was from him that the village of Mermpaka took its name.

From the beginning of the 20th century, the church operated as a cemetery church, and in 2001, as part of the second CSF, the cemetery was moved to another location and the area around the church was re-modelled.