The Old Monastery of Talantio in Arachnaio 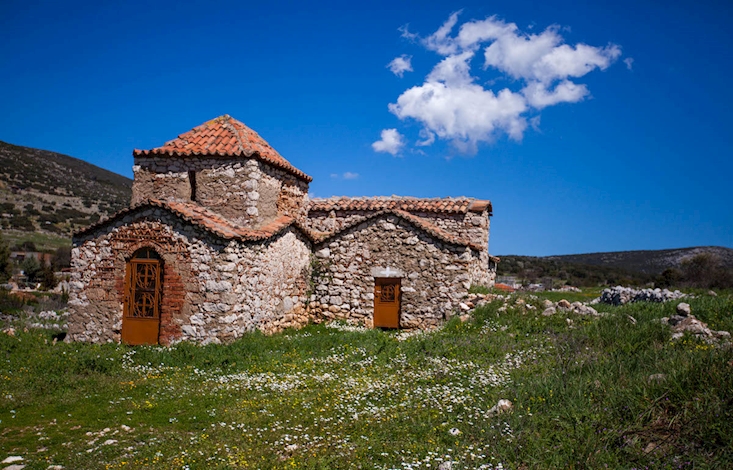 The Old Monastery of Talantio is located to the south east of Arachnaio and is one of the most important monuments in the area. The surviving elements of the monastery are the catholicon [monastery church] and a smaller chapel attached to its south-east side. The two buildings communicate internally via a small opening.

The catholicon would have been dedicated to the archangels, the Virgin Mary and Agios Vlasios, while the chapel was dedicated to Agia Marina. Both buildings are of the cross -shaped architectural type. More specifically, the catholicon follows the A2 variation, with peculiarities, such as the vaulted dome which covers a section of its west side. The catholicon also has a narthex.

The walls are made of rough-hewn stone with the addition of bricks. Some parts of the catholicon's masonry are done in the cloisonné style, while the west wall is decorated with tiles. The windows in both the catholicon and the chapel are few and small, a characteristic of mostly Post-Byzantine church architecture. Based on its morphology, the catholicon must have been built between the 14th-15th centuries, while the chapel was possibly built a little later.

The interior of the catholicon is decorated with murals. Two layers can be discerned, with the second being the most representative (the initial layer can only be found at a few points). The murals of the second layer, which date from the 2nd half of the 16th century, demonstrate influences from the workshop of Theodosios Kakavas. In fact, it is not impossible that one of the painters was a member of this particular Nafplian workshop. Standing out on the south wall of the nave is a depiction of Agios Vlasios, in the form of an offerant, by Andreas Sikoulas.

The monastery was abandoned in 1761 and the monks moved to the New Monastery of Talantio, to the west of the village.