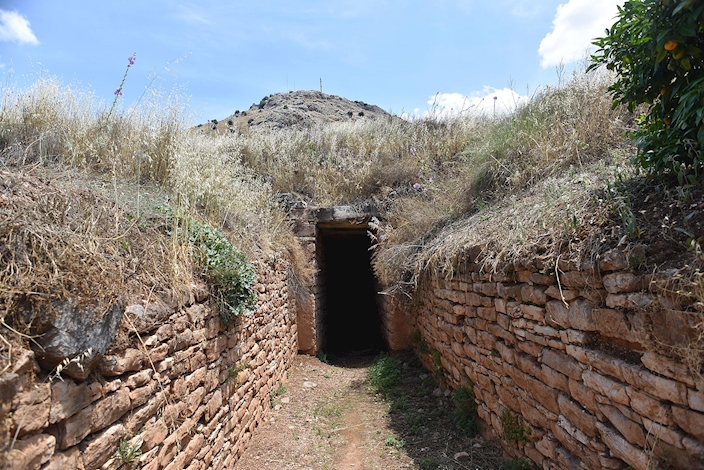 In 1913 a tholos tomb was excavated on the west slope of Profitis Ilias hill, about 1 km from the citadel of Tiryns. The dromos of the tomb, which was constructed after the raising of the beehive vault, is 13 m long and almost 3 m wide. The walls of the dromos are revetted with roughly cut limestone slabs. The entrance portal of the tomb was decorated with wall-paintings of spirals. The lintel is a monolithic slab measuring 3 x 2 x 0.40 m, while the threshold has not survived. The entrance was closed by a double door. The circular tholos is 8.45 – 8.50 m in diameter. The two lowest courses are built of large stones, the rest of limestone slabs, like the dromos. On the north side a burial pit was found, lined with undecorated stucco.

No Mycenaean pottery at all was found inside the tomb. It is possible that the contents had been removed in Roman times, although the possibility that the tomb was never used cannot be ruled out. Its construction is contemporary with the third building phase of the citadel. As Protocorinthian and black-figure sherds found in the cist and in the dromos confirm, the tomb must have been open already in that period. The kind of finds suggests a hero cult. In the Roman imperial period the interior was converted into an oil-pressing installation.

A second tholos tomb, whose dromos had evidently been located in 1913, was excavated in part by the IV Ephorate of Antiquities in the 1980s. It stands southwest of the first.

A cemetery of chamber tombs was discovered in 1915, on the east slope of Profitis Ilias hill. Excavated in 1927, the 50 tombs investigated are clustered in three groups and are of the usual type with dromos, stomion and chamber, cut into the soft rock. They were used for successive multiple burials from the 16th down to the 12th century BC. Most tombs must have been rifled in antiquity. Indeed the so-called Tiryns Treasure may well be from here. Some tombs must have been used also after the collapse of the Mycenean civilization, as attested by the few finds of the Geometric period.

Given the distance from the Mycenaean citadel and the paucity of the grave goods, it is debatable whether the cemetery should be identified as the official cemetery of Tiryns. The tombs are not visible or visitable today, since the majority have been backfilled and the area planted with citrus trees.