The Sacred Church of Agios Ioannis Theologos in Ligourio 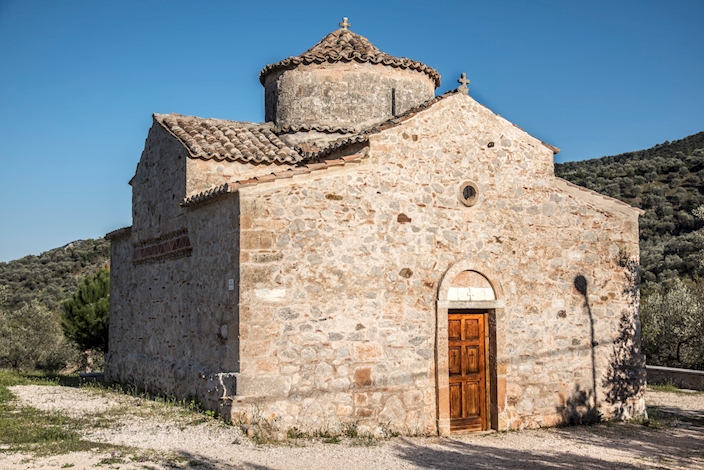 The church is located to the south of the road that goes to Nea Epidauros, and dates from the second half of the 11th century or the beginning of the 12th. It belongs to the distyle [two-columned] cross-in-square type, with three three-sided apses to the east. It has two entrances, one on the west side and one with a portico on the south. At a later date, possibly during the time of the second Venetian occupation (or the 19th century), the cupola, the dome on the south section, the upper section of the south and east walls, a large section of the north wall and almost the whole of the west wall were re-built. It seems it was during this extensive restoration that the now demolished cell was built in the south-west corner of the church, possibly as part of its function as a small monastery. The masonry style is both rubble style and cloisonné, while there is some brick decoration. No murals survive inside the church, and the built-in iconostasis is a later addition.

In 2009, restoration work was carried out by the church council, with the oversight of the 25th Ephorate of Byzantine Antiquities, as well as excavation work in the surrounding area, during which tombs from the 12th-14th centuries were found, as well as possibly some later ones.